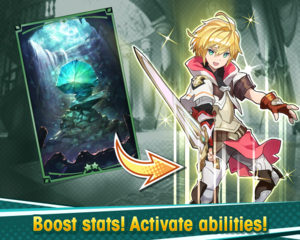 Wyrmprints are cards that can grant additional abilities and stats when equipped to an adventurer's weapon. The current iteration of the system was introduced in Version 2.0.

Each adventurer is able to equip up to 8 wyrmprints, depending on the slots for their weapon. These slots are divided between the following:

The abilities of a wyrmprint, as well as its appearance, can be enhanced when it is unbound 2 times in the

Upgrade menu. The abilities will be enhanced again at the maximum of 4 unbinds.

Some wyrmprints have access to an Affinity, which will grant additional abilities if enough prints of that Affinity are in the adventurer's loadout. Affinity bonuses are not subject to the usual wyrmprint stat caps mentioned above.

Wyrmprints can be obtained in the following ways:

All permanent wyrmprints are available for purchase in the Shop, in exchange for

Eldwater. The purchase cost varies depending on a Wyrmprint's Rarity, as listed below:

Occasionally, some wyrmprints will only be available for sale for a limited time. After this period, they will be removed from the shop until they receive a re-run later on. Some limited wyrmprints may later become permanently available.

Events will often give out Wyrmprints as endeavor, treasure trade, or clear rewards, and several of these prints are only obtainable during their specific event. These prints will have significantly cheaper upgrade costs than normal wyrmprints from the Shop. Due to their "free" nature and cheap investment costs, wyrmprints given out this way are commonly called "Welfare" wyrmprints.

Wyrmprints released in April 2019 or earlier will rarely appear as drops in certain quests. However, any duplicate drops of prints the player already has will be automatically converted into

Rupies instead, as listed below: 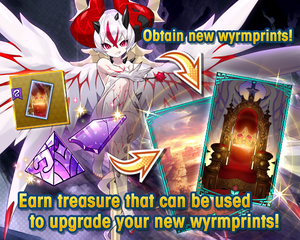 rarity are available exclusively as drops from Rise of the Sinister Dominion. Duplicate drops will be converted into special materials needed to upgrade the same wyrmprint. 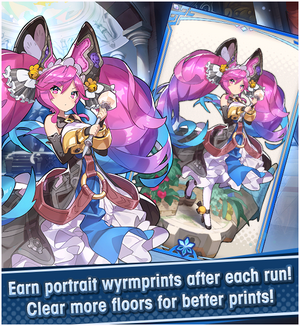 Special portrait wyrmprints of the

rarity are available exclusively as rewards from Enter the Kaleidoscape. Each print has randomized abilities, and a portrait of the adventurer who earned them. 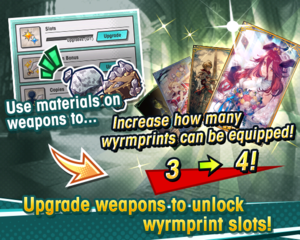 Wyrmprints are equipped into the slots of weapons. These slots are split between 3 types:

The amount and type of slots available will vary by the weapon, and it may be possible to unlock additional slots with materials. The Weapon Crafting article has some more details. 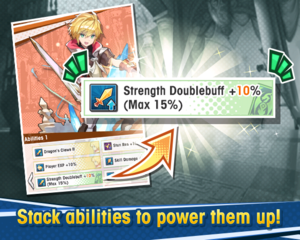 Equipping multiple wyrmprints that grant the same stat will cause them to stack together, up to that effect's cap. The caps generally look at limiting the final effect granted, rather than the conditions to grant the effect. For example, equipping

There are also two categories of effect: Passive or Buff.

Please note that wyrmprint caps ONLY apply to wyrmprints. Any abilities natural to an adventurer will stack with wyrmprints, with no limit. 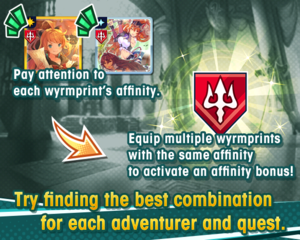 Some wyrmprints will have an Affinity, which will grant a bonus ability if an adventurer equips enough of the same-Affinity prints. For example, equipping 2 prints with

Lance Affinity will grant a bonus +5% Force Strike Damage. Note that this bonus ignores the stat caps that wyrmprints are normally subject to. The Affinity Bonuses article has more details.

Wyrmprints can be upgraded through the 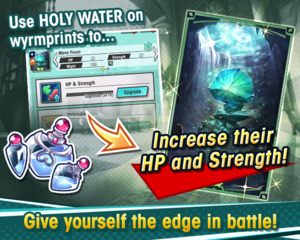 As the name might imply, upgrading HP & Strength increases the stats of a wyrmprint.

There is a maximum amount of upgrades allowed, depending on the rarity of a wyrmprint and the amount of unbinds it currently has:

Upgrading a wyrmprint costs Holy/Blessed/Consecrated Waters, with the type and amount needed per level varying by the wyrmprint's rarity.

Wyrmprints from Rise of the Sinister Dominion will additionally require a print-specific material for upgrading. Below is an example: 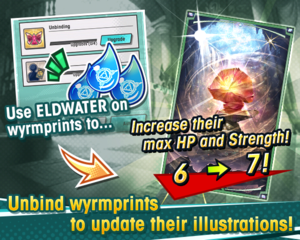 Unbinds will increase a wyrmprint's upgrade cap (as described above), and will also:

Unbinds cost Eldwater, with the costs varying by rarity and unbind count as follows:

It is also possible to use

) in place of Eldwater or materials, at a cost of 1 key per unbind.

Unlocking copies allows the same wyrmprint to be used on multiple adventurers in a team, and any upgrades made to the print will be cloned among these copies.

Getting more copies costs Eldwater, but the cost is generally very steep - one copy's cost is usually equal to the cost of purchasing + max unbinding that wyrmprint.

Augments are gem-like items that can add additional HP and Strength to wyrmprints.

Augment effects will also be cloned across any copies of that wyrmprint. For example, using 50 HP augments and 50 Strength augments on a wyrmprint that has 2 copies, will cause both wyrmprint copies to be augmented, instead of needing to apply another 50 HP and Strength augments.

More details, as well as drop locations for augments, can be found at the main Augments article