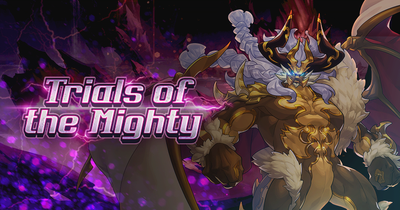 Trials of the Mighty is a series of medium-difficulty quests in Dragalia Lost. Players can fight a variety of bosses to collect character-specific Convictions and Devotions, which are required for certain adventurers' Mana Spirals.

Trials of the Mighty quests operate on a rotating schedule, with each quest available for 7 days at a time, returning every 1 to 2 months. Unlike Void Battles however, the Trials schedule is only known for one month at a time.

One or more new Trials are added every month, so the schedule is also subject to frequent adjustments. New trials will always be the sole trial available for their first 7-day period, while repeat trials will be "batched" with other older ones to share a 7-day period.

The currently-offered trials rotate weekly, at 6:00 am UTC on Wednesday of every week.

Trials of the Mighty is unlocked by clearing Chapter 10/6-3 of the Main Campaign.

Quests in Trials of the Mighty restrict both the element and weapon type of adventurers that are allowed to enter.

Note that these restrictions are also applied to dragons and "backline" adventurers (adventurers in a team that contribute their co-abilities to the leader, but do not enter combat in co-op).

Trials of the Mighty offers Daily Bonuses. Like Weekly Bonuses, the player will be asked for confirmation if they would like to receive this bonus.

However, if the player "misses" a day, that day's Daily Bonus will be Stocked, and can still be claimed within the next two days. Up to 3 bonuses may be stocked at a time, and will appear as additional chests next to the usual daily bonus chest icon. If less than 3 Daily Bonuses are stocked at any time, the empty stock chests will be greyed-out instead.

When a Daily Bonus chest is claimed, the items given will be rewarded based on the quest cleared, even if that quest was not available when the chest was stocked.

Certain adventurers have mana spirals that require materials from Trials of the Mighty. These mana spirals omit several of the usual materials, replacing them with character-specific Convictions and Devotions.

Convictions and Devotions can only be obtained from the daily bonus of Trials of the Mighty. Therefore, assuming one claims the highest daily bonus available, the minimum amount of days required to completely unlock a Trials spiral is 23 days.

See: Guides#Trials of the Mighty Guides

This section contains the schedule of Trials of the Mighty up to April 27, 2022, and does not include the rotating two-week schedule introduced from that date onwards.