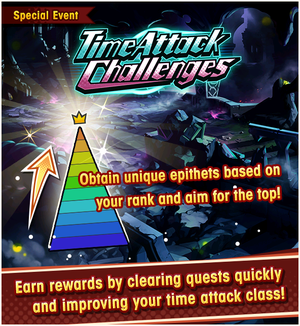 Time Attack Challenges are an event type in which players can compete to clear certain stages in the fastest time possible. Primary rewards from this event type include

Time Attack Challenges include copies of quests from various areas, such as Void Battles, The Imperial Onslaught, Advanced Dragon Trials, and The Agito Uprising. Each quest is assigned a Time-Attack-specific difficulty: Beginner, Standard, Expert, or Master. These Time Attack difficulties might not match the difficulty of the original quest that was copied. For example, a quest called "Kai Yan's Wrath: Master" in Time Attack could actually be a copy of the normal quest "Kai Yan's Wrath: Standard". 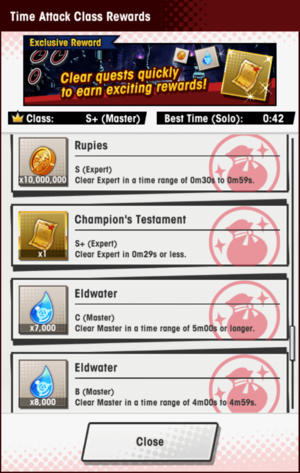 Class Rewards are based on the player's personal best times in solo play only. Clearing a stage will earn the player a "class" ranging from C to S+, as well as a one-time reward for each class tier. Class rewards are available for each of the four difficulties - Beginner, Standard, Expert, and Master - and clearing a higher difficulty will automatically reward all class rewards from lower difficulties. For example, clearing Standard with any class will automatically reward all of Beginner's class rewards from C to S+.

Class rewards include large amounts of 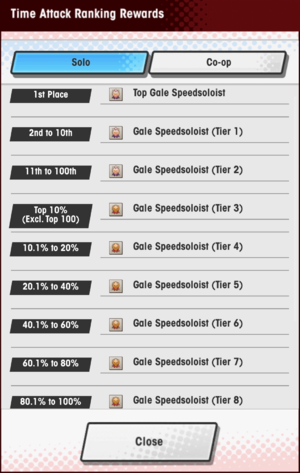 Ranking Rewards are based on the player's best times in both co-op and solo play, and are rated against all other players. Only Ranked difficulty is eligible for Ranking Rewards.[1] Additionally, in co-op, all four players must be present for the entirety of the quest - if even one disconnects, the run is disqualified from the rankings.

Ranking Rewards will only grant Epithets, and will not grant any special items or materials. In other words, the rewards are purely bragging rights.