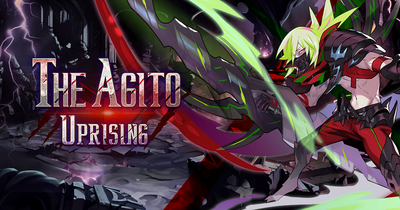 The Agito Uprising is the second series of high-difficulty quests in Dragalia Lost. Released after the Advanced Dragon Trials, unlike the bosses up to this point, which have been predominantly dragons, the Agito take on an almost human form. Defeating them yields materials that can be used to craft 6

Weapons or traded for Facilities that boost the stats of adventurers in the Treasure Trade.

The Agito Uprising is unlocked by clearing Chapter 10/6-3 of the Main Campaign and any of the Standard difficulty Advanced Dragon Trials.

Standard and Expert quests for each Agito boss have been added periodically starting Dec 26, 2019 with Volk's Wrath and ending on Aug 28, 2020 with Tartarus's Wrath. Similarly, the Master difficulties for each boss have been added periodically starting May 26, 2020, again with Volk's Wrath and ended on Nov 11, 2020 with Tartarus's Wrath.

Prologue: The Pinnacle of Evolution

On Nov 27, 2020, the new Legend difficulty was added starting with Volk's Wrath, and ended on Jul 30, 2021 with Tartarus's Wrath. These quests may only be undertaken by a team of adventurers and dragons of the element the boss is weak to. Clearing the Legend difficulty grants materials needed to refine Agito weapons for the second time. 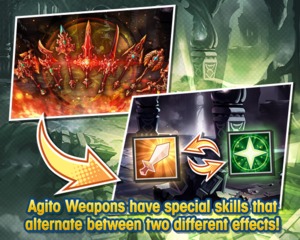 All the weapons from the Agito series have a special skill that alternates between two different effects after each use. After refining them once, they will also acquire a unique ability with different alternating effects based on the weapon's current skill. By refining them a second time, the player will unlock a new appearance for them.

Just like with weapons, materials obtained from an Agito boss can be used to redeem and upgrade the Tree corresponding to the element the boss is weak to. Each tree increases the stats of adventurers based on their element. 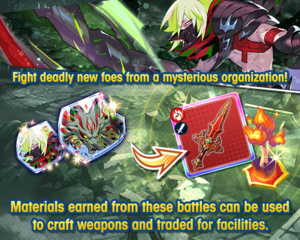