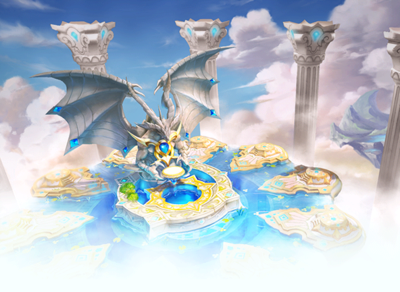 Summoning is one of the key mechanics of Dragalia Lost. To obtain new Adventurers and Dragons, players are required to summon through the Summoning menu using

Summon Vouchers. Prior to Version Update 1.7.1, Wyrmprints were also obtained through summoning (wyrmprints are now purchased in the Shop with

In rare circumstances, limited-time adventurers may end up being released into the regular pool after a certain amount of time have passed, such as the case with

Prometheus in the Ardent Admirers summon showcase again, or

Inside most summon showcases, there are 3 different options to choose from to start a summon: Daily Deal, Single Summon, and Tenfold Summon.

The currency required to summon is as follows:

Upon choosing a summon type and currency to spend, players are brought to an animated scene where a character summons a ray of light granting an item, which drops either a weapon, or cluster of crystals.

Sometimes, the last item in a summoning batch may change color to rainbow when it lands on the platforms. This means that the item is actually of a 5

rarity, and is a unit that the player has never owned before.

Prior to Version Update 1.7.1, summoning could also drop a tablet of three different rarities/colors, meaning that the item was a Wyrmprint.

A variety of teasers may appear when performing a summon, each holding different meaning for the summon results:

adventurers and dragons have a base summon rate of 0.50% and 0.80% respectively (1 in 200 and 1 in 125 summons). The individual rates for featured lower rarities vary depending on how many units of those rarities are in the featured pool.

On the 10th summon in a tenfold summon, the unit summoned is guaranteed to be 4

rate will be added to the 4

Rarity Distribution prior to A Splash of Adventure (July 31, 2019)[edit]

or higher rarity pull is guaranteed, the normal summon rates are as follows:

fails to appear, the 5

appearance rate will increase by 0.5%. This will reset back to the base rates if a 5

is pulled, even if it is a duplicate.

rate with pity added is 9%, after which the next summon is guaranteed to be a 5

summon (if a tenfold is performed, then the first item is the guarantee).

Maximum pity can be achieved after 100 summons with no 5

on a regular summon showcase, or 60 summons with no 5

on a Gala Dragalia Showcase.

Pity rate will subtract from the 3

appearance rate whenever possible. On the 10th summon in a tenfold, which is guaranteed to be a 4

or above, pity rate is subtracted from the 4 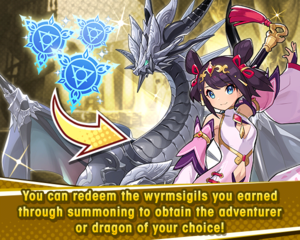 For every summon performed, the player will receive 1

Wyrmsigil. For summons performed with

Diamantium (paid currency), 2 Wyrmsigils will be received per summon instead.

If 300 Wyrmsigils are collected from a single Summon Showcase, the player will be able to choose one Adventurer or Dragon from that Showcase to receive. The Adventurers and Dragons on offer will vary by Showcase. Note that Wyrmsigils cannot be transferred between Showcases.

When a Showcase ends, if the player has at least 300 Wyrmsigils in their possession, they will be given a 24-hour grace period to redeem them. After that period, or if the player had less than 300 sigils, all of the player's leftovers will be converted into

Wyrmsigil Remnants. These can then be traded for various items in the Shop's Treasure Trade.

It is possible to obtain multiple copies of dragons. However, if summoning an adventurer that was already obtained, the player will receive

Eldwater instead. The amount of eldwater received depends on the rarity of the adventurer.

Prior to Version Update 1.7.1, the rewards for duplicate adventurers were the following: