Stat Boosts are effects that can increase the user's stats, or other attributes.

This distinction is primarily important for the Damage Formula, where some effects are "bracketed". For example,

Strength Up calculation is approximately as follows:

Boosts within the same bracket are being added to each other, but boosts across different brackets are being multiplied by each other.

Mathematically, this means that over-investing boosts into one bracket (for example, too many passive strength boosts) is less efficient than investing in multiple brackets.

A common source of confusion is between

For the sake of comparison, assume that an adventurer equips a 40%

Passives are usually invisible to the player in combat, save for a short message above the character's head that disappears after a couple of seconds (for example, "

Most passives operate without any hard cap on how much can be stacked at a time.

All passives are immune to 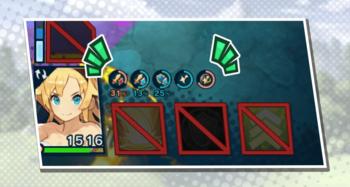 Buffs will manifest as blue-bordered icons above the player's skills during combat.

The border around a buff icon will slowly tick down like a clock, to indicate how long until the buff expires. Below each icon, a number will display one of three types of detail about the buff.

Buffs are subject to hard caps on intensity, quantity, and level. The exact caps will vary by stat and effect.

Most buffs are nullified by

Certain effects will have bonuses depending on the amount of buffs present (regardless of what type of buff it is).

Amps are similar to buffs, but use a strict tiering system. They manifest as yellow-bordered or orange-bordered icons above the player's skills during combat.

However, Amps will NOT activate effects that look at the amount of buffs currently present.

Amps are also NOT subject to the same caps as buffs.

In terms of damage calculation, Amps are added in the same bracket as buffs.

All Amps are immune to

For more information on how Amps work, see the Amps article.

EX is currently only available in the form of primary Co-abilities, such as the standard 10%

All EX are immune to