See: Currency for more details on the kinds of currency used in Dragalia Lost.

Diamantium is no longer available for purchase.

Diamantium and special endeavors that grant rewards for completing them.

Currently there are no limited packs. 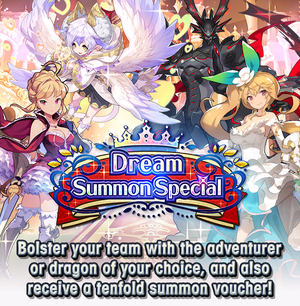 The Dream Summon Special is a special Shop Pack that allows the buyer to choose one adventurer or dragon to receive, in addition to a

Diamantium x1,200, and tends to only be available every few months.

This is where players can buy Materials needed to level up and upgrade Adventurers, Dragons, Wyrmprints, and Weapons

All deals in this section reset daily at 6:00 UTC.

An Item Summon grants 10 items from a random selection of various Materials,

Mana. Once a day players can perform an Item Summon at no cost. Any subsequent summons on that day costs 50

Wyrmite initially, which doubles each summon. Players can use the item summon a maximum of 6 times per day. The full list of potential rewards can be found on the Item Summoning page.

All deals in this section reset weekly on Monday at 6:00 UTC.

Here players can exchange in-game Materials for various rewards such as Dragons and Facilities.

These exchanges are where materials can be traded for other materials to unbind and enhance/unbind weapons, unbind wyrmprints, unbind dragons, unlock Mana Circle nodes, and upgrade facilities.

These exchanges include materials commonly used to upgrade adventurers, weapons, wyrmprints, and dragons.

Wyrmsigil Remnant is obtained when the player has Wyrmsigils remaining after a Summon Showcase ends.

These exchanges include rare items, such as High Dragon weapon materials.

These exchanges are for obtaining augments. It resets monthly.

These exchanges are for obtaining more copies of the Story-Obtained Greatwyrms to fully Unbind them, and for trading differing rarities of dragon scales.

The Void Battles Treasure Trade featured crafting-material items for a limited time (Aug 22, 2019 to Sep 02, 2019). The player could combine materials from the Scalding Shroom and Twilight Hermit with materials from other Void enemies to trade for materials required to craft various Void weapons.

These exchanges are for obtaining the 5

versions of the Greatwyrms as well as facilities that boost the stats of Dragons.

These exchanges are for obtaining elemental facilities that boost the stats of Adventurers.

These exchanges are for various rare materials, as well as Adventurer-specific Convictions and Devotions.

Wyrmprints are split into the following tabs:

The "Fully Unbound" button toggles displaying the appearance and abilities of Wyrmprints when fully unbound.

The cost to purchase a Wyrmprint varies by its rarity. Once a wyrmprint is owned (whether through purchasing it, or through other means such as drops or endeavors), it will no longer appear for purchase in the shop.

Prior to version 2.0, it was possible to purchase multiple copies of Wyrmprints from the shop:

Copies currently held did not increase the cost. Only direct purchases from the shop would increment the cost for that specific Wyrmprint. From the sixth Wyrmprint onward, the amount of Eldwater required would reset, starting again with the amount required for the first trade.

A Limited Wyrmprint. Note the deadline.

Certain Wyrmprints are only available to purchase for a limited time. These will appear in the Featured tab, and will have deadline dates listed in red text.

Some wyrmprints were initially limited, but were later made available permanently:

Diamantium is the premium currency in Dragalia Lost. It can only be obtained through real money purchases. It can be used for the same purposes as

Wyrmite, but can also be used to purchase special items and renewing packs from the Shop.

Additionally, players can purchase Value Packs which contain Diamantium, along with other items.

Allows players to increase the amount of Dragons that can stored at any one time.

Prior to Version 2.0, it was also possible to increase the amount of Wyrmprints or Weapons that could be stored. As of Version 2.0, storage of these items is unlimited instead.