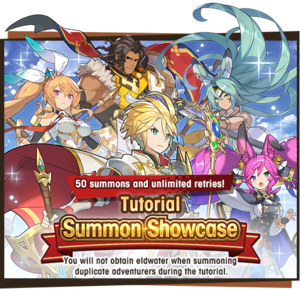 This guide covers pull priorities when using the in-game reroll system, the Tutorial Summon Showcase, which was introduced in version 2.4.0.

You will have the option to reroll fairly early, while the game is downloading extra data in the background. At first, there are three options:

Once you press Summon, you'll need to press "Next" 4 times until you reach the last page and view your full results. Then you'll have 3 more options:

Use Results to look over what you have. If you don't like it, you can Reset to try the 50 pulls again. Once you're happy with your pulls, press Accept.

The reroll summon showcase has a 6% rate for 5

units, so you should expect to get about 3 on average with each attempt.

Also, try to have as few duplicates as possible. Duplicates of dragons can be equipped to multiple adventurers, but dupes of adventurers won't do anything.

Here are some tips to help narrow down whether your roll might be good:

Gala units are a special set of higher-power 5-star units, which are usually variants of main story characters. The summon showcases they can appear in (called "Gala Dragalia" or "Gala Dragalia Remix") are available on a limited basis twice per month. This reroll system includes several Gala units, so pulling some is generally very valuable, as they can be hard to get otherwise.

I'm still not sure whether my roll is good.[edit]

If you are unsure about your current reroll, post screenshots of your results in the community Discord server and someone can help you out. Please make sure to check your roll with the rules above, to make it easier for others to rate your roll.

Click an icon to jump to an explanation of that dragon's ranking.

Click an icon to jump to an explanation of that adventurer's ranking.

certainly shouldn't be the focus of your rerolls, we would like to stress that 4

in this game can be good. Below are some examples to watch for (but don't sweat it if they aren't in your reroll - they'll come home through regular summoning soon enough):