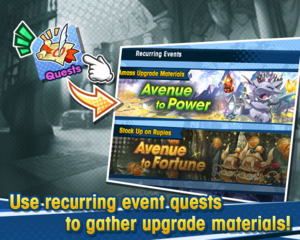 Chapter 25
Proof of the Pact

September 30, 2022 - October 10, 2022
This is a tale of events three hundred years ago, when a young Alberius is traveling the wide, wide world with the Windwyrm, Midgardsormr. One day, after saving a young woman from Dyrenell Empire soldiers, she gifts him a mysterious blade and begs him to keep it safe...

You take on the ever-changing labyrinth called the Kaleidoscape, collecting equipment and skills to aid you on your journey to its final floor.

Prologue: The Pinnacle of Evolution

Prologue: Fallen Angel of Hesitation  •  The Demon of Ruin

Prologue: Fallen Angel of Conflict  •  The Abyss of Strife Beckons

In the Primal Dragon Trials, you face the human and ancient form of the five greatwyrms in an epic boss battle.

Rise of the Sinister Dominion: Legend

A new set of high-difficulty quests that can be taken only by adventurers and dragons of different elements.

This quest features a mechanic that causes the boss to change their elemental attunement mid-battle. When this occurs, players must adapt to this new threat by changing their team, and therefore must prepare two teams of predetermined elemental attunements before embarking on the quest.