This article may need cleanup to meet quality standards.
Please help improve this if you can. The Discussion page may contain suggestions. 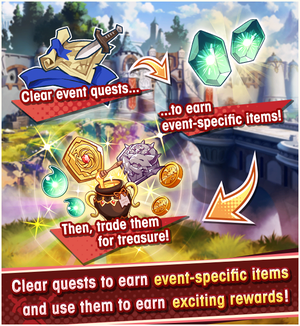 Onslaught Events were an event type in which players can fight waves of enemies, and engage in exclusive Dragon Battles - quests where the player is shapeshifted for the entire duration of the fight. Onslaught Event quests are restricted to solo play only.

Its primary rewards include Tomes and

As of December 2021, it has been announced that new Onslaught, Defensive, and Coliseum events will no longer be added, but existing ones will receive reruns at regular intervals or will be added to the Event Compendium. 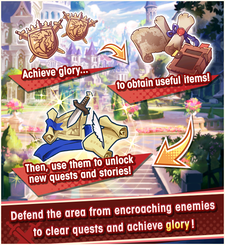 Onslaught Events include a prologue story (automatically played when first entering the event), with additional story segments unlockable with

War Chronicles that can be obtained through

Glory (Event Point) rewards. These stories do not need to be viewed in order to unlock other quests in the Onslaught Event. Instead, further quests are unlocked through obtaining

Battle Charts, which are also obtained through

Glory rewards. They are in their own menu situated in a lower-central position on the map.

Dragon Battles are quests unique to onslaught events where the player remains shapeshifted for the entire duration of the quest. Some dragon battles involve defeating a single boss, while others require defeating multiple waves of enemies.

Stratagems are a resource that can be used to challenge EX dragon battles. They can be obtained as drops from Master-difficulty quests. They are consumed upon clearing the EX dragon battle at a rate of one per clear. 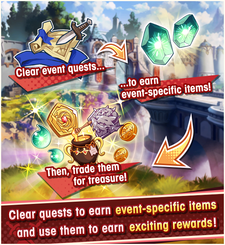 Onslaught Events have only one form of currency,

Primal Crystals, which can be exchanged in the Event Shop for various rewards. 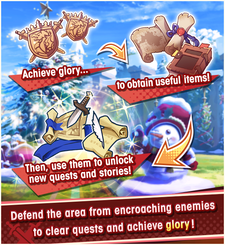 Glory, a variety of Event Points that can be collected during the event. These points cannot be spent, but instead act as a score system, with rewards available depending on the total amount of points collected.

Event Points are available from all quests associated with an Onslaught Event, but tend to appear in large amounts from higher-difficulty battles. The amount of points gained can be increased by meeting certain objectives on certain stages, such as clearing within a certain amount of time, or taking fewer than a certain amount of hits.