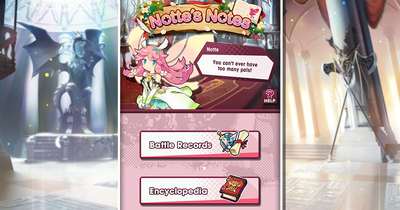 Notte's Notes is an in-game collection tracker, which also grants rewards depending on how much a player's collection is filled. This feature was added in version 2.6.0. 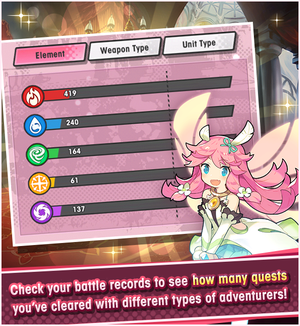 The Prince will increment the

Attack counters by 1 each.

However, the counters are also subject to additional rules: 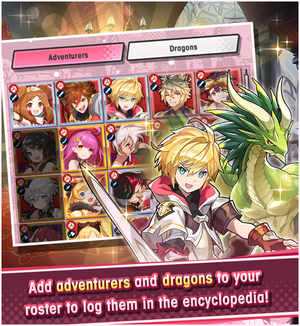 The Encyclopedia tracks the player's currently-owned adventurers and dragons, as well as the extent of their investments. Owned units will be highlighted, while the remaining ones will be greyed-out.

Adventurer entries allow players to view the adventurer's portrait, 3D model, and a short description, as well as listen to voice lines. This acts similarly to the adventurer's normal profile when they are long-tapped in other menus.

In addition, a "Memories" section is available. This allows for viewing certain animations or listening to certain voice lines:

The encyclopedia will also track each adventurer's current level and amount of mana circle nodes unlocked.

Dragon entries allow for viewing the dragon's portrait, 3D model, and a short description, as well as listen to voice lines. This acts similarly to the dragon's normal profile when they are long-tapped in other menus. 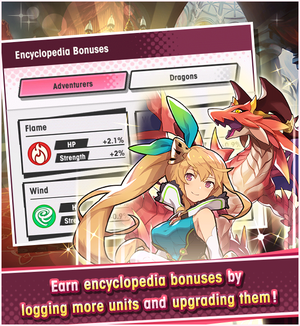 Collecting and upgrading adventurers and dragons will also grant a stat bonus, depending on progress.

Adventurer Bonuses are applied to all adventurers of the matching element. For example, obtaining a bonus through collecting and investing

Elisanne will grant that bonus to all

The current maximum possible bonuses are as follows:

Adventurers who join the player temporarily, will not grant bonuses until they join permanently (by maxing out friendship points, etc).

Dragon Bonuses are applied to all dragons of the matching element. For example, obtaining a bonus through collecting and investing

Brunhilda will grant that bonus to all

The current maximum possible bonuses are as follows:

If a dragon is received but sent to the Gift Box, the dragon will be marked as "obtained" in Notte's Notes immediately - before it is actually claimed from the box. 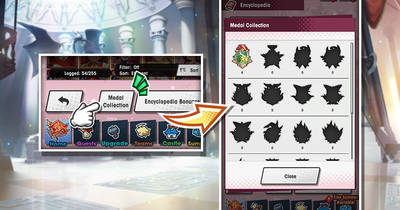 By clearing certain quests without using skip tickets, your adventurers can earn medals. Medals are given on a per-adventurer basis. 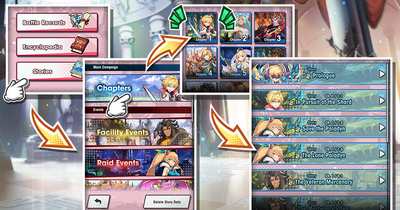 Stories allows players to re-view the story scenes of any main campaign chapters they have completed, and any past events even if the player did not participate in them.

Stories are sorted into the following section:

When a main campaign chapter or event is selected, there will also be Characters and Memories options.

Characters lists some characters that have an important role in that chapter/event's story.

Memories lists full-screen artwork that is used during the chapter/event's story.