Most bosses will start quests in Normal state. While in this state, the boss's Mode Gauge will fill up as damage is dealt to them. Once the Mode Gauge is full, the boss will transition into Overdrive state.

Gauge Inhibitor will slow the rate at which the Mode Gauge fills, effectively delaying the transition to Overdrive. 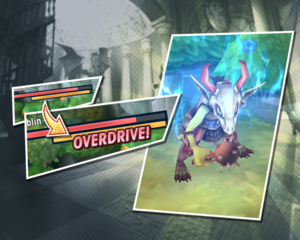 When Overdrive state starts, all afflictions on the boss will be cleansed, and a light-blue effect will appear around the boss. The boss's strength and defense will be increased, and they will usually use new, stronger attacks while in Overdrive state. The exact changes to strength, defense, and skillset will vary by boss.

Most force strikes will have high "OD Modifiers", which will increase the rate at which the Mode Gauge decreases.

The following effects will deal more damage to a boss that is in Overdrive state.

Gauge Accelerator increases the rate at which the Mode Gauge decreases, effectively speeding up the process of transitioning to Break state.

Gauge Decelerator decreases the rate at which the Mode Gauge decreases, effectively delaying the transition to Break state. 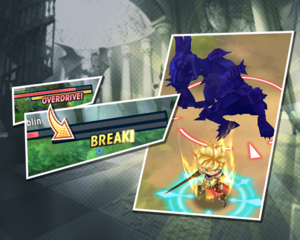 During Break state, the boss gets a dark-blue hue and will lay on the ground for a few moments. Their defense will be significantly reduced, allowing an opportunity to deal large amounts of damage. After a set amount of time, the boss will get back up and transition to Normal state. The exact amount of time that Break state lasts will vary by boss.

The following effects will deal altered damage to a boss that is in Break state.

Usually this amounts to increased damage, however some effects will decrease the damage dealt instead: