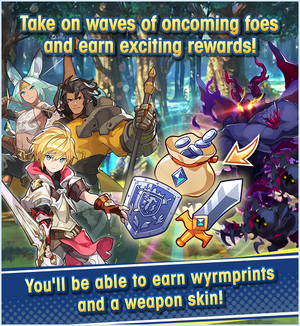 Invasion Events are an event type in which players fight waves of enemies in a timed mode, and collect

Heroism based on the amount of enemies beaten. Primary rewards include exclusive 4

wyrmprints, as well as weapon skins.

Invasion Events include a prologue story (automatically played when first entering the event), with additional story segments unlocked as soon as the previous one is read.

Invasion Quests are quests unique to invasion events, where the player must defeat as many enemies as they can for the entire duration of the timed quest. Players also have infinite revives in these quests.

Standard and Expert difficulties are unlocked at the start of the event, and feature the Quick-Play Co-op system. This system automatically matches up players, instead of requiring them to create rooms to play together. Master difficulty unlocks later in the event, and uses the standard Co-op room system.

The duration of the quest is 60 seconds in Standard difficulty, and 90 seconds in Expert and Master difficulties. Enemies spawn in waves, and in greater number as those waves are completed. Periodically, large enemies such as Cyclops that require hit counts will appear, necessitating adventurers with high hit counts and/or

Overdamage. Gold Slimes may also appear, granting a large score bonus. The earned score after time is up is converted into

Standard enemies in invasion quests have abilities that increase or decrease damage from close- or long-ranged attacks. This does not apply to hit count enemies or Gold Slimes. These abilities differ from event to event, and exact details can be found on the individual event pages. 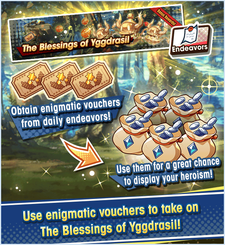 Enigmatic Vouchers may be obtained from Daily Endeavors. Reward quests feature only enemies who reward a large number of points when defeated such as Gold Slimes), making this a major source of

Trials are quests that can be played in either solo play or co-op play, and do not reward

Heroism. These quests usually pit players against a story-relevant boss. Standard and Expert difficulties are unlocked at the start, while Master difficulty unlocks later in the event.

Enigmatic Vouchers are a resource that can be used to challenge reward quests. They can be obtained from Daily Endeavors.

Enigmatic Vouchers are consumed upon clearing the reward quest, at a rate of one per clear. 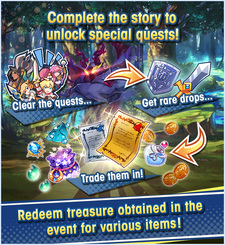 Guardian's Swords, which can be exchanged in the Event Shop for various rewards. Notably, Event shops typically feature an exclusive 4

wyrmprint. Further items may be made available later in the event as well.

Heroism, a variety of Event Points that can be collected during the event. These points cannot be spent, but instead act as a score system, with rewards available depending on the total amount of points collected.