The Imperial Onslaught is a Challenge Event where the player faces off against the Dyrenell Empire. Clearing these quests yields materials that can be exchanged at the Treasure Trade for Wyrmprints, used to enhance Facilities that boost the stats of adventurers, and craft Core Weapons.

The Imperial Onslaught mode is unlocked by clearing Chapter 6/4-4 of the Main Campaign. 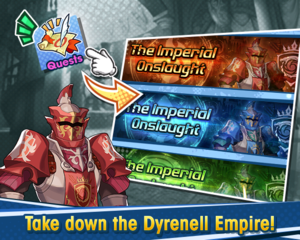 During Imperial Onslaught quests, the player will face off against multiple soldiers from the Dyrenell Empire on a relatively-small map. After defeating the first wave of enemies, the boss unit will appear with reinforcements. Defeat the boss unit to clear the quest.

Each quest series comes in 4 difficulties from Beginner to Master, and enemies' attacks focus on a specific Affliction, which varies depending on the element of the map.

Tablets and Insignias earned from Imperial Onslaught quests (in addition to

Crimson Cores and the limited

Twinkling Sand), can be used to craft 5

Weapons from the Core series. These weapons each come with a special weapon skill, but have relatively-low strength compared to other 5

weapons from the Chimeratech or Advanced Dragon Trials series.

Core Manacasters are especially noteworthy for unlocking weapon abilities, which can usually only be done with Void weapons. These abilities have been relocated to the Core series, since Void Manacasters don't exist.

Axe of the Blazing King

Staff of the Red Emperor

Axe of the Southern Cross

Spear of the Northern Cross

Wand of the Torrent 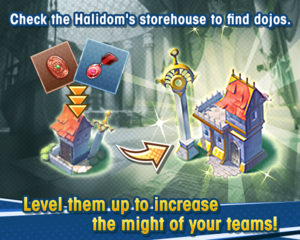 When Chapter 6 / 4-4 of the Main Campaign, Diadem of Light, is cleared, two of each type of Dojo will be added to the Adventurers tab of the Storehouse under Castle Grounds. Each dojo increases the stats of adventurers based on their weapon type, and can be upgraded with Dyrenell Coins and Insignias. 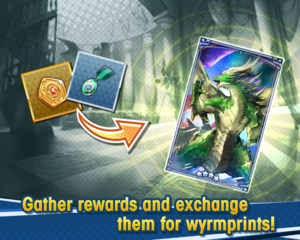 The player can obtain unique wyrmprints by exchanging Insignias at the Treasure Trade. Insignias and Dyrenell Coins are also used to unbind and copy these wyrmprints, instead of

Queen of the Blue Seas

King of the Skies