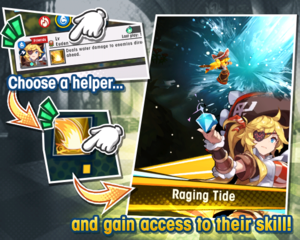 Helpers are special adventurers that can be used during solo questing, providing players with up to three uses of the adventurer's first skill under most cases.

Helpers are selected for a single quest by choosing them in the menu at the start of a quest. The adventurer's skill can then be used at any time during the quest by tapping on its icon at the bottom of the screen. Note that selecting a helper will replace the lead adventurer's second equipped Shared Skill. 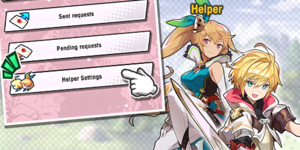 More → Friends → Helper Settings will open up a menu where players can select one adventurer and a full loadout of equipment. Doing so will make that character available for other players to use during solo quests. 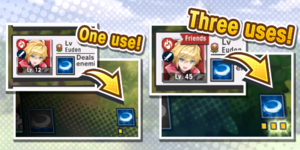 Helper skills are available immediately upon starting a quest. To use a helper skill, tap on the helper skill's icon at the bottom-right or left corner.

Helper skills are available for use a single time if a player is not friends with the other player that provided the helper, and three times if they are friends.

It is possible to not use a helper in a solo quest; in this case, access to a second shared skill will be available to the leader unit.

Using a helper skill will cause the combo counter to reset, regardless of

Once a quest is completed with a helper skill and the player exits the quest menu (that is, they didn't tap "repeat" or do auto-repeat), that helper skill will become temporarily unselectable for further quests.

All other boosts are based on the helper's alone. Abilities with conditions outside of weapon classes or conditions that require the adventurer to have a HP greater than or equal to a set value will not function.

Hence, it is important to equip a helper appropriately depending on the type of helper skill they have.

Some adventurers have their helper skills behave differently than expected.

A handful of passive effects on Helpers will also affect the player's team:

However, some effects either may not work as expected, or do not work at all: