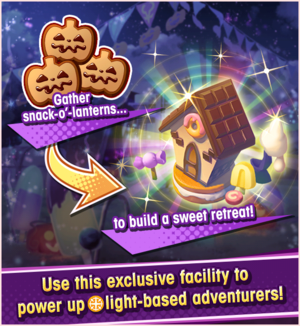 Facility Events are an event type in which players can construct an event-exclusive Facility to boost the stats of their adventurers. Primary rewards from this event type include the Facility itself, an exclusive 5 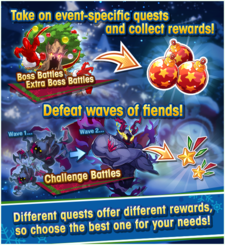 Boss battles are a quest that can be attempted solo or in co-op. This tends to involve fighting a boss that appears upon entering the boss room, as one might see in other quests. This quest is the primary source for Facility-building materials.

EX Boss battles have a chance to unlock whenever the Expert difficulty of Boss battles is cleared. Once EX has been cleared, it will disappear and must be unlocked again by playing Expert boss some more. Note that EX Boss battles do not stack - if EX has been unlocked, then another run for it cannot unlock again until it has been cleared first. As such, it is recommended to play EX Boss immediately whenever it appears, to maximize the amount of EX runs available.

core weapons [1], as well as Wyrmprints with relevant material- or point-boosting abilities[2], with the event-exclusive 5 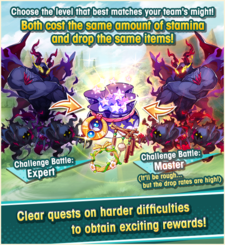 Challenge Battles are a solo-exclusive quest in which the player must defeat 5 waves of enemies, culminating with a powered-up version of the Boss battle boss in the 5th wave. If this quest is failed at any point, whether through running out of time or having all units be defeated, then the quest will automatically complete. This will expend the player's stamina and give rewards according to how far into the quest the player got, unlike most other quests that will not expend stamina until a quest is cleared proper. This quest is the primary source for Event points.

This quest also has a chance to drop tier 1 4

core weapons[5], as well as Wyrmprints with relevant material- or point-boosting abilities, with the event-exclusive 5

Master Challenge[7] is a higher-difficulty mode that can be unlocked after clearing the default (Expert) Challenge Battle. Master offers the same rewards and costs the same amount of stamina as Expert, but offers higher drop rates for items.

Nightmare Challenge[8] is an even-higher-diffcilty mode that can be unlocked after clearing the Master Challenge Battle. Nightmare offers the same rewards and item drop rates, and costs the same amount of stamina as Master.

Additionally, the first clear of Nightmare each day will award the Grand Bounty

- a random selection of 3 rewards, 1 from each of the pools listed below. These contain rare items.

Each Facility Event offers a free 5

Wyrmprint, but this Wyrmprint has more functionality than simply being a piece of equipment. These Wyrmprints have 1 normal ability, and 2 event-specific abilities to boost the amount of Facility-building materials and Event Points earned from their Facility Event's quests.

Several duplicates of this Wyrmprint can be obtained from Event Point Rewards, the Event shop and from drops in EX Boss battle and Challenge Battle. It is highly recommended to equip these in order to earn the event's rewards more efficiently.

Once the event has ended, the event-specific abilities will disappear, but will re-appear should the event get a re-run.

Due to their status as free equipment, these event Wyrmprints have lower stats than 5

Eldwater-purchased Wyrmprints. While their 1 normal ability is comparable to a 5

Eldwater print's abilities in quality, these event prints effectively only have 1 ability when used outside their original event, compared to typical 5

prints that have 2 abilities. These prints also sell for less Eldwater than typical 5 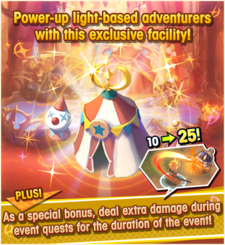 True to the name, Facility Events offer an exclusive Event Facility for the player to build. These Facilities boost the HP and Strength of Adventurers with specific elements or weapon types, similar to elemental Altars or weapon Dojos. Event Facilities have a max level of 30 or 35[9].

Each Facility boosts damage dealt against enemies in the event of their release, at a rate of +5% damage per Facility level. This can reach a maximum of 150% at Facility level 30, or 175% at level 35. After the Facility Event has ended, the damage boost is no longer applied, but the HP and Strength boosts are permanent.

The materials used to upgrade Event Facilities are named differently each time, but tend to be available in large quantities from the Facility Event's Boss battle quest. The Amount of materials available from drops can be boosted by drop-boosting abilities on equipped Wyrmprints. 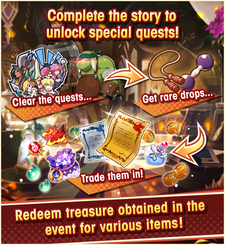 Every Facility Event features 3 forms of currency, differently-named for each event. For simplicity, we will call them T1, T2, and T3 currency. T1 currency is the material used to upgrade the event's Facility, and is most common from Boss Battles. T2 and T3 currency are only used for redeeming shop items, and can appear commonly from Challenge Battle quests.

The Event Shop primarily allows redeeming T2 and T3 currencies for various rewards, including additional copies of the 5

event wyrmprint. It is also possible to trade currencies up or down tiers as needed, however note that more resources are needed to trade up than would be obtained from trading down.

Despite the increased cost of trading up, a common tactic to clear out shop rewards is to equip T1-boosting prints, clearing Boss Battle quests, and trading up unwanted T1 currency into T2 to buy items. This is more efficient than trying to earn T2 or T3 currency directly through Challenge Battle.

After buying everything desired from the Event Shop, it can be prudent to save up T1 currency. This allows players to get a head start on a event rerun in the future.

Each Facility Event features a differently-named variety of Event Points that can be collected during the event. These points cannot be spent, but instead act as a score system, with rewards available depending on the total amount of points collected.

Event Points are available from all quests associated with a Facility Event, but tend to appear in large amounts from the Challenge Battle. The amount of points gained can be increased by meeting certain objectives, such as only bringing Adventurers of a certain element, not getting hit more than a certain amount of times, or clearing within a certain amount of time. Points can also be boosted by point-boosting abilities on equipped Wyrmprints.

Looking Glasses, which can be obtained from Facility Events.