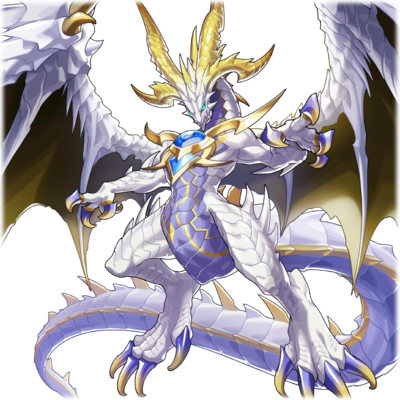 Elysium was known as the Holywyrm was the ruler of all dragons. Pactbound with the Goddess Illia, together they fought the Other to bring to the future, or so it's told.
Japanese Title
{{{TitleJP}}}
Japanese Name
エリュシオン
Voice Actor (EN)
Voice Actor (JP)
First Appearance
September 27, 2018

The common perception of Elysium is of a being that is a culmination of order, truth, and justice. However it is later shown that Elysium is a being with a sole objective and motive; protecting the worlds from destruction. His sole purpose is to do so, and his morality is based on this purpose.

He is willing to do anything to achieve this, including massacring all humanoids. The only thing stopping humanity's destruction at his claws in Ilia's era was the agreement that humanoids would make sure that Morsayarti wasn't resurrected. When the Dyrenell emperor broke this, Elysium decided to have all the dragons bring humanity to its knees.

Elysium strives for a perfect world because he is afraid of the power of possibility to ruin worlds. Originally he aligned with his creator Bahamut in favor of possibility, but with the destruction he has seen in the worlds, he began to favor complete order and perfection like Xenos.

Elysium is a powerful dragon known to hold sway over the rest of the dragons. He is shown to be able to manipulate the flow of mana coursing through the world and envision different realities. He is also a hivemind of sorts, each universe's Elysium is the same being, and one's death dooms them all. Elysium applies the knowledge from each world's scenarios in his judgement, which leads him to come to many conclusions in favor of Xeno's worldview.

The Primal Mark of dragons rests with him, and at one point he possessed all the abilities of the Greatwyrms stemming from their natures as fire, water, light, shadow, and wind incarnate. Upon his death they were returned to the Greatwyrms.

He, despite by and large agreeing with him on possibility, distrusts and fights Xenos. Xenos' rule would be terrible enough that Elysium never would let him run the worlds.