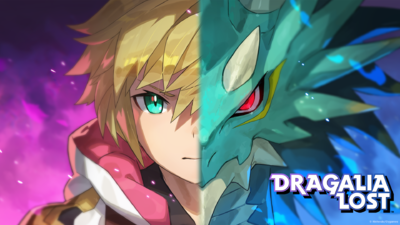 Shapeshifting is a mechanic that allows adventurers to transform into their equipped dragon during a quest.

During a quest, an icon of the equipped dragon as well as a two-part Dragon Gauge will appear next to the adventurer's icon. When this gauge is filled to at least 1 bar's worth (50%), the dragon's icon will light up and shapeshifting will be available for use.

Shapeshifting allows the player to temporarily fight as the dragon, granting access to new standard attacks, a new skill (that is immediately ready to use), procs any dragon-related abilities, removes most debuffs, and a dragon timer that shows how much longer the Adventurer will remain in their shapeshifted form. 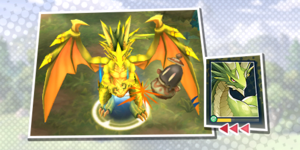 During shapeshift, the player cannot be knocked back and is immune to all afflictions and most debuffs. Any damage taken will deplete part of the dragon timer, rather than HP. Once the timer is fully depleted, whether by time or by taking damage, the dragon will revert to the adventurer, and shapeshifting will be unavailable for 10 seconds (even if there is enough dragon gauge remaining to shapeshift again). 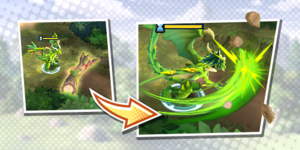 All manner of shapeshift attacks will break enemy blue shields instantly, and can also destroy some field obstacles. They however cannot instantly break Kai Yan's Adamantine Shield unless a dispel effect is carried by the attack (e.g. any dragon's standard attacks with

Unlike adventurers, both moving and dodging during shapeshift will also cause hitstun towards targets and break objects.

When using a dragon's skill, their animation is locked - even if the dragon receives enough damage during the skill to end dragon form, the dragon will not revert until the skill animation has finished under most circumstances. This can be used to "dragon tank" attacks that would otherwise be lethal to the adventurer if the dragon were to revert too early.

Computer-controlled allies will not shapeshift if it is available. Lead units will shapeshift if the Auto-shapeshift feature is turned on during auto-play. The dragon will immediately use their skill and start their combo chain once the skill animation ends.

A Dragon Strike is a charged attack, similar to an adventurer's force strike, that can be performed by tapping and holding the screen. Only certain dragons are capable of performing a dragon strike, and it behaves uniquely for each eligible dragon.

The dragon gauge dictates whether or not shapeshifting is available. At least 50% charge is needed for a single shapeshift; it is possible to store up to 100% charge before further Dragon Gauge gains are lost.

The Dragon Gauge can hold a maximum of 1000 DP (Dragon Points). 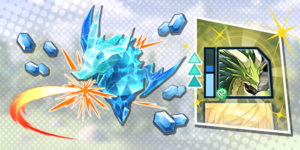 Personal gauge boosts increase the user's dragon gauge by a certain amount when a certain condition is met.

Co-op-wide gauge boosts instead apply to all units in both solo and co-op play.

Dragon Haste increases the rate at which the unit will gain Dragon Gauge.

Certain effects will change the amount of dragon gauge consumed to shapeshift.

If the amount of gauge consumed to shapeshift is decreased, it is still necessary to have the dragon gauge at 500 DP to initiate the shapeshift.

Some abilities will trigger an effect that only applies during shapeshift. These effects will cease to apply after shapeshift has ended.

Dragon Damage increases the damage dealt by all attacks while in dragon form.

Dragon attack rate up increases the speed at which attacks can be performed while in dragon form.

Certain effects will increase crit rate while in dragon form.

Certain abilities will add an affliction punisher effect to attacks while in dragon form.

Certain effects will increase defense while in dragon form.

Dragon Time, as the name may suggest, is the amount of time that the adventurer can stay in dragon form. This time can be extended by bond level with the equipped dragon, which can be increased in the Dragon's Roost. Some skills and abilities will also increase Dragon Time.

Some skills or abilities will trigger an effect upon shapeshifting, and their effects will persist after shapeshift has ended.

Certain skills will have enhanced effects after shapeshifting, that last throughout the quest.

Certain abilities will grant an HP Regen effect upon shapeshifting. Unlike other effects, these tend to have a time limit - but it is still technically possible for them to persist beyond shapeshift, if the shapeshift is ended quickly.

Abilities such as Dragon's Claws or Dragon's Might will grant one or more strength buffs that last throughout the quest.

Dragon's Skill grants one or more buffs to Skill Damage that last throughout the quest.

Dragon's Scales grants one or more buffs to Defense that last throughout the quest.

Some abilities will increase max HP for the remainder of the quest upon shapeshifting.

Effects just before reverting from Shapeshift[edit]

Certain skills will trigger automatically when the shapeshift timer has run out. Reversion from shapeshift will therefore be delayed until after the skill has completed its animation.

Effects after reverting from Shapeshift[edit]

Some abilities trigger an effect after shapeshift has ended.

A Unique Transformation is a special mechanic that replaces shapeshifting for certain units.

Similar to shapeshifting, Unique Tranformation (UT) uses a gauge and is available to use once the gauge reaches a certain threshold, which varies by the adventurer. Once it is activated, the user will emit a shockwave that deals 200% damage of the user's element to surrounding enemies. The gauge will then start to decrease, acting as a timer to indicate how long the Unique Transformation state will last. A UT cannot be entered if the adventurer has an affliction.

During UT, the user is also not immune to damage, so any damage taken will deplete HP as usual - but not the UT gauge.

UT can be freely de-activated by tapping the icon again (as opposed to shapeshift, which can only be exited when the timer is depleted). If this is done, the UT gauge will pause with the same fill amount as when it was deactivated. It will then be possible to enter UT again after about 5 seconds, provided the gauge is filled enough to activate it again. If the UT gauge fully depletes and is not ended prematurely, then the wait time will be 10 seconds instead.

UT does not consume the regular Dragon Gauge, so if an ally in solo play activates UT, then the shared Dragon Gauge will not be affected for other units on the team. UT is also unique to the unit itself, meaning multiple units on a team can activate UT without preventing other units from doing so.

However, the regular Dragon Gauge holds a maximum of 1,000 Dragon Points (DP), while the UT gauge can hold higher amounts, thus requiring more DP to fill it up. For example, if a UT gauge can hold a maximum of 3,000 points, then if an enemy granted 100 DP, a normal adventurer would gain 10% gauge while the UT adventurer would only gain 3.33% gauge.

Since Shapeshift Prep's effect uses a percentage instead of a DP value, it is not subjected to the above caveat - 10% Shapeshift Prep would give 10% gauge to both a normal adventurer and a UT adventurer.

Depending on the UT adventurer, some skills or standard attacks will also directly add or remove from the UT gauge. These boosts only affect the UT gauge, and will not affect the regular Dragon Gauge.

Unique Transformation has some variants, each of which may have their own quirks.

Unlike Shapeshifting, Dragondrive does not transform the Adventurer into their Dragon - instead, it enhances the stats, skills, and/or attacks of the base adventurer.

The Dragondrive gauge holds a maximum of 3,000 points, meaning that any regular Dragon gauge boosts will be only about 33% as effective, percentage-wise.

For some units, standard attacks during Dragondrive will fill the gauge, allowing the Dragondrive state's timer to be extended if one keeps attacking. Skills can also restore or deplete portions of the Dragondrive gauge.

While computer-controlled, adventurers with Dragondrive will activate it at their earliest opportunity. While in Dragondrive, they also will not use a skill that would cause Dragondrive to end (such as

Dragondrive adventurers may NOT participate in Dragon Battles, as they do NOT shapeshift into a dragon.

Some adventurers can perform a Hybrid Transformation with different characteristics from normal Shapeshifting. These forms can be considered a hybrid of regular Shapeshifting and Dragondrive.

The Unique Transformation gauge for Hybrid Transformation adventurers holds a maximum of 1,200 or 1,800 points, depending on the level of their related abilities. This means that any regular Dragon Gauge boosts will be only about 83% or 56% as effective, percentage-wise.

Additionally, the user will have 50%

Damage Reduction while in their transformation.

Whether an adventurer with Hybrid Transformation will transform or not will depend on their primary role, whether they're currently controlled in the party, the game mode, and whether Auto-Shapeshift is turned on.

Some adventurers can summon a partner instead of shapeshifting. The partner will fight alongside the user, and the user's attacks and/or skills may be powered up.

Summoning a partner has similarities to Shapeshift and Dragondrive:

Different adventurers will have different ways of filling their partner gauges. For more details, refer to their respective adventurers' page.

Additionally, the user will have 40%

Damage Reduction while their partner is summoned.

These adventurers will summon their partner once at least one of their native skills are ready:

These adventurers will summon their partner as soon as possible: