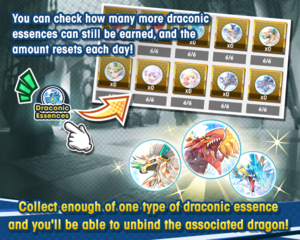 Draconic Essences can be obtained from Main Campaign quests, and in general are a more-accessible way to obtain unbinds on eligible 5

dragons. The dragons that have essences available tend to be older and often overshadowed by newer dragons within their element.

Note that Essences will help with unbinding a dragon, but will not assist with actually obtaining that dragon in the first place. For instance,

Leviathan's Essence can add unbinds to

Leviathan, but the player's first copy of Leviathan must be summoned. 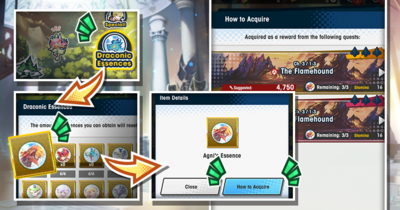 Draconic Essences are available from specific quests in the Main Campaign on Hard and Very Hard difficulty.

To view the locations of each essence, tap the "Draconic Essences" icon in the Main Campaign menu, tap an essence, and then tap "How to Obtain". Alternatively, the locations for all essences are listed below: 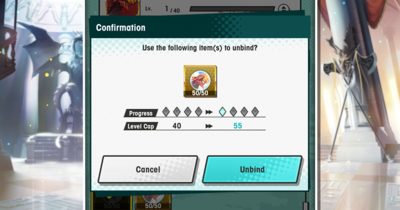 In the Unbinding menu under

Upgrade → Dragons → Unbind, Draconic Essences can substitute for a

Sunlight Stone or duplicate copy of their matching dragon. 50 essences are needed for one unbind on the relevant dragon.

Essences cannot be applied unless the dragon matches the essence, and enough essences are in the player's inventory.

The following dragons currently have access to Draconic Essences. 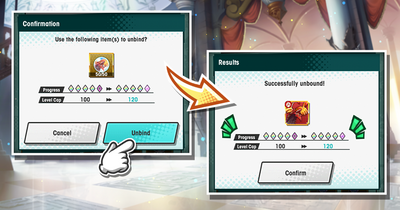 By using Draconic Essences or

Sunlight Stones, certain dragons can be unbound a 5th time to further upgrade their abilities and raise their level cap. However, the dragon's skill will not be upgraded.

The following dragons currently have access to the 5th unbind.

The following is a history of when new Draconic Essences have been released over time: