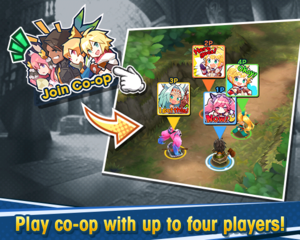 Co-op is a multiplayer game mode in Dragalia Lost where players can create rooms and invite up to three other players to play alongside. Co-op is unlocked after clearing the Main Campaign Ch. 2/2-1: The Sylvan Archer.

From the Quests main menu, players can select the Join Co-op button to go into co-op, select the quest, and join the available co-op rooms.

Players may also join a co-op room from within a quest's co-op options, with either Quick Play or Find a Room. 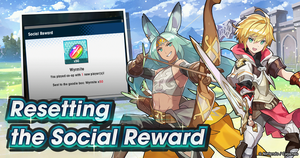 Upon successful completion of a co-op quest, if that co-op quest was played with another player for the first time, then a reward of 50

Wyrmite will be obtained. This reward can be received for the first 50 people met for a total of 2,500

Co-op social rewards may be reset periodically. Some example dates are listed below:

A player can be barred from participating in co-op for 60 minutes if:

As of version 1.6.1, players are now able to create room conditions. Players can allow or restrict certain elements, weapon types, and might from joining. The maximum might a player can set is: