When Summoned
My wings beat to heal humanity's ills!

When Shapeshifted Into or Collection Portrait
Receive my power!

Using A Skill or Collection Portrait
Judgment to all who bring pain or sorrow!

When Entering Dragon's Roost
Got an hour or twelve to spare hearing about my travels?
What's up? You hurt? If so, your gal Raphael's got your back!
Good to see you here, princey! I was just wondering when I'd see that mug of yours again.

After Receiving a Gift
Hey, thanks! And here's a little souvenir of my travels in return.
Appreciated! And since one good turn deserves another, this baby's aaall yours!

After Bond Level Increase
Huh, this journey with you ain't half bad.
Ha ha ha! Oh, you're a fun one! I like you more by the day.

Idle After Bond Level 1
It's best for healer types to have some combat prowess—makes treating injuries in battle easier.
So long as I've got life in me, I'll continue helping the world.
You don't want to abandon anyone, and that's totally my jam, too. Yep! You're a good'un, princey.

Idle After Bond Level 10
Chocolate's great! It's easy to pack for long journeys AND it's delicious!
Just go wherever your fancy strikes and your feet take you! Ha ha ha!
I value Ryszarda's sensitivity and timidity, 'cause those things are definitely not me.

Idle After Bond Level 20
I don't do the whole "doting parent" thing like Ramiel and the others, but Ryszarda's still my little gal.
I always appreciate you for coming along on my journeys. You're a real lifesaver!
I travel so I can offer aid to those beyond hope. The trips are my prayers, in a way.

When Unbound
I'm going to get stronger and stronger so I can help the entire world!

When Fully Unbound
Healing the world is a big deal, but this power's gonna let me pull it off!

Raphael's initial role, as bidden by the
high-ranking angels, was to heal those sick and
injured who came to the cathedral each day.

She went about her work with zeal and finesse,
never presuming to rise above her station.

Until she met a pilgrim called Tobia.

Tobia came to the cathedral and received of
Raphael's healing. The angel listened with rapt
attention as her patient spoke of his travails.

To Raphael, who'd lived a life behind four
walls, these tales struck her as happenings
from a realm unlike any she'd ever known.

"I wish to see the outside world, too."

Her desire grew in her chest until it felt likely
to burst, and so she planned to slip free of the
cathedral and embark upon her own journey.

Raphael told a lie that she'd been instructed
to go heal people in the world beyond,
and threw her lot in with Tobia.
Thus did the two become bosom companions.x400px

It happened that this was around the time that
the war between angels and demons had grown
fiercer.

The world Raphael saw on her travels was
nothing like the one she'd dreamed of,
ravaged as it was by the fires of conflict.
It felt as if one and all were ill and suffering.

As an angel of mercy, she could not ignore
the cries of the wounded. Raphael did as her
heart bade, and went around healing the
people. Yet more still cried out for salvation.

Though Tobia did all he could to assist Raphael
as she frantically worked to heal the world,
they were all but powerless in the face of
such immeasurable suffering.

Raphael knew she alone could not save every
life, but nonetheless, she did not quail from
her task. She pressed on though it wore her
ragged, deaf to Tobia's protestations.

But Raphael's efforts would prove fruitless.
She reached the limit of her strength...
and she collapsed.

On her journey, she came to know a land
ravaged by war, its victims innumerable.
She struggled to nurse them all to health,
but ran out of strength...and collapsed.

Tobia brought Raphael to the great cathedral,
delivering her from death's door. It was then
that the great Sandalphon, leader of all angels,
appeared at her side.x400px

Sandalphon did not begrudge Raphael her
indulgence. She explained that she, too,
lamented the tragedies of the outside world,
and felt shame that she could not abate them.

And it was exactly with all this in mind that
Sandalphon bade Raphael return to the great
cathedral where her duty awaited.

With the war worsening, no effort would be
enough to save all its victims. Her talents were
best used healing wounded soldiers brought to
the cathedral, and in so doing, hasten victory
over the demons, even if only by a day.

Truth rang in Sandalphon's words.
And yet, Raphael could not forget
the state of the world. She could
not readily choose to cast it away.

The thought of allowing war to snuff out even
one life grieved her. But she knew well her
own powerlessness. Was it already hopeless?

"I know it is a fool's errand, but I want to save
everyone nonetheless! I want to grow strong!
Is there truly nothing I can do, Sandalphon?!"

Raphael pleaded, utterly unconcerned with
putting on airs. She already knew the answer.
However, Sandalphon reached out to Raphael.
"Then the time is right. Forge a Sigil."

Sandalphon whispered of a plan to share the
power of angels with humans, making them
into apostles by way of a pact called a Sigil.

Traveling the world, fighting alongside the
apostles to defeat the demonic hordes...

This was just what Raphael wanted.
But there was one condition.

"A human that becomes an apostle will be
joined as one with their angel, bearing the
constraint that places upon their life.
If there is a person who would aid you in your
cause, then forge a Sigil with them and go."

Raphael was agonized by this condition. Who
would wager their life on one as naive as she?
She would have no choice but to remain in the
cathedral...or so she thought, until a man's
voice rang out.

"I shall become your apostle."

It was Tobia, her pilgrim companion.

"I have borne witness to your conviction.
My strength is yours. In exchange, promise
me that no matter what happens, you will
never give up."

Tobia's true belief was as a clarion bell,
ringing sweetly in Raphael's ears.
Filled with gratitude, she held out her
hand to reward his resolve with a vow.

"I swear it to you. I will journey alongside my
apostle and become strong. And then, so long
as I have life left to me, I will heal all the pain
of the world!" 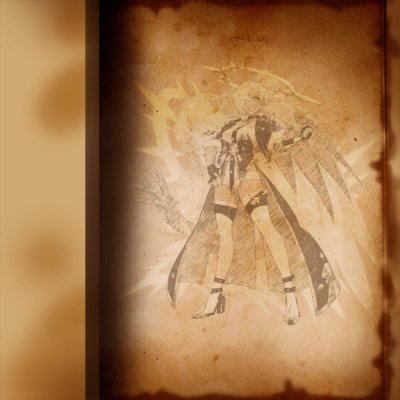 And so, the first apostle Tobia and his Sigil-
bound angel departed the cathedral once more.
They traveled hither and thither, saving many
lives as the battle with the demons raged.

Time marched onward, and Tobia at last left
the world. Raphael forged Sigils anew with
several individuals, uttering farewells to
each in turn as their lives guttered out.

But no matter how many years passed,
Raphael always kept the vow she made
with Tobia deep in her heart.
It spurs her onward even today.

So long as her limbs would bear her, she
would continue to help the people of the
realm with all that she was able, healing
the world one step at a time.